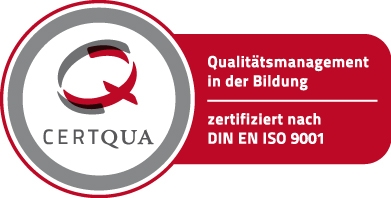 The Simulator Centre belongs to the first companies which have got a certificate according to the new standards for quality management DIN EN ISO 9001:2015.

The previous certificate for the quality management of the simulator center issued according to DIN EN ISO 9001:2008 will end contractually after a three-year term at the beginning of June 2016. For ensuring the certification without interruption an audit for recertification has to be performed and completed successfully in due time.

Although the revision of standards 9001:2015 didn’t become valid until autumn 2015 the simulator center decided to accept the new requirements. Once again the company Certqua, which is operating in the field of education, was commissioned with the implementation of the recertification. The preparations for the audit started a year ago as it had become clear, how the revision of the standards would develop. New procedures as well as records and proofs related with them need a longer introductory phase.

In August 2015 the management level was informed about the new features of ISO 9001:2015 and the procedure for the recertification was worked out within a first workshop. Measures concerning the context of the company and interested parties were determined as well as provisions for risk-based thinking, decision making and acting. Furthermore measures to specify the process orientation and to ensure company knowledge were initiated. A tool called the Turtle method and proven in the automotive sector for years now was applied for the new annual process and risk analysis of the core processes.

The resulting new records and proofs were already included and for the first time evaluated within the management review in November 2015 in order to have initial experiences and records available.

A further workshop in December 2015 pursued two objectives. The chosen approach was to be reviewed on the basis of the first known interpretations of the new standard requirements. Moreover those standard requirements which had not been met yet were to be identified and appropriate measures to fulfil them were to be initiated. In the first quarter of 2016 the measures recorded in a resulting action list were processed and completed systematically. The completely revised quality manual was implemented as the youngest revised guideline document.

The chosen approach proved to be well suited for the Simulator Centre. Both the documentation review and the audit from 25 to 28 April 2016 remained without a finding.